Bushfires have been ravaging Tasmania for more than a month. This is not an isolated event, but rather the latest episode in a series of intense fires that have threated the unique biodiversity of the island over the past years. In the summer of 2012-2013, record hot temperatures and dry conditions led to a six-month-long fire season in the south-east of Tasmania; this peaked in January 2013 with the fires on the Forestier and Tasman Peninsula, where several towns were evacuated. 100 homes were lost in the town of Dunalley.

It was unprecedented, the longest fire season ever recorded in Tasmania.

In January 2016, another streak of bushfires hit the island. While this time properties were spared, fires burned over 72,000 hectares in central-western Tasmania, 20,000 of which located in the World Heritage Area. This caused severe damage to the unique sub-alpine and alpine habitats where species such as Pencil Pines, King Billy Pines, and cushion plants are found. The iconic Pencil Pines and King Billy pines (Athrotaxis cupressoides and A. selaginoides) are slow growing trees that can live over 1,000 years, but are restricted to fire-sheltered, high rainfall locations, as they lack those traits typically associated with fire-resistance, such as resprouting ability, thick bark, and aerial or soil seedbanks [1, 2]. The peat on which these plants grow, which can take millennia to form, is also prone to fire damage when dry, releasing great amounts of carbon in the atmosphere [3].

The 2016 fires reached several of those fire-sensitive habitats in western Tasmania and on the Central Highlands, where the burnt areas might take decades or centuries to recover, if at all.

The damage caused was, once again, described as unprecedented. 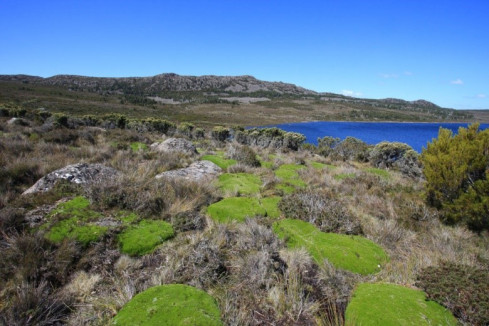 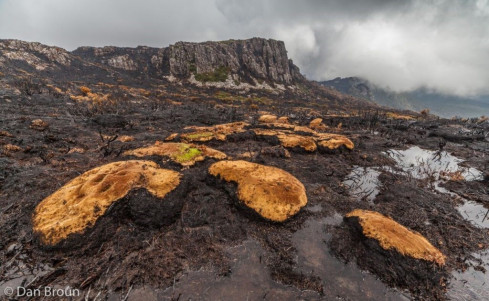 This summer Tasmania is facing a new fire emergency, with hundreds of professional and volunteer firefighters constantly battling the over 50 fires that have been burning across the state, reddening the Tasmanian skies and covering half of the island in a blanket of smoke.

The unique Tasmanian fire sensitive vegetation is at risk again, particularly in the Central Highlands and in the south-west, where the largest remaining forest of King Billy pines is located. To date, the Tasmanian Fire Service estimated that nearly 200,000 hectares have burnt, and, despite the relief brought by some needed rain, the fire season might be far from being over.

The extent of these fires is unprecedented. 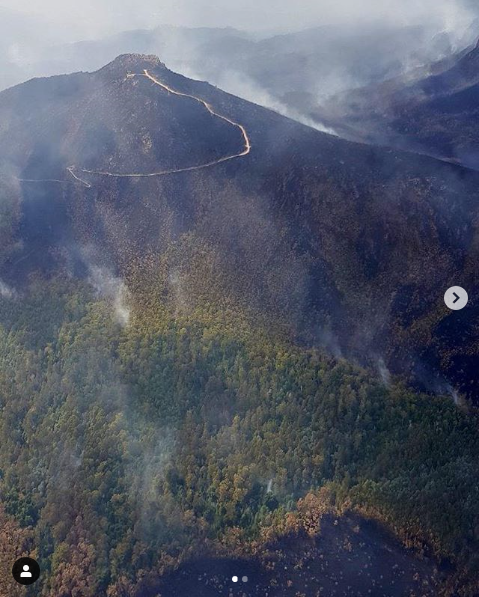 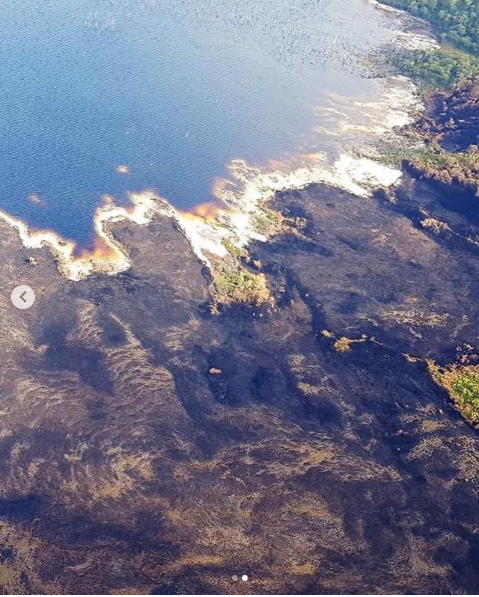 Instagram post from paraviontas showing areas of Tasmanian bush burnt during the 2019 bushfire. "The huge loss of ancient native flora and fauna in the areas we’re surveying is so hard to convey with these images. The sheer magnitude is astounding and difficult to digest."

The frequency at which high-intensity fires have been recently occurring in Tasmania suggests that we will continue to use the word ‘unprecedented’ for quite some time. At the very least, bushfires of similar extent and intensity will likely become the norm rather than the exception. But what is driving this change? To start a fire, three key elements need to be present: fuel, oxygen, and an ignition source. The air provides plenty of oxygen. As for fuel, in Tasmania an increase in average temperatures, as well as natural and anthropogenic variations of the westerly winds of the Southern Annular Mode, led to drier summers [4, 5], facilitating the accumulation of high amount of flammable plant material. The ignition source is provided predominantly by lightning; rarely recorded before 2000, fires started by dry storms have become more frequent in the Tasmanian Wilderness World Heritage Area, and the area burnt by those fires has also increased [6].

How will fire-sensitive vegetation respond to these new fire regimes? A study of the King Billy pine population that was damaged by an intense fire of the Central Plateau in 1961 showed little to no regeneration of the trees in the burnt area, nor presence of new seedlings [7]. This was likely exacerbated by the post-fire establishment of alpine shrubs in the area, which provide high amounts of fuel load under dry condition, potentially increasing fire frequency and determining a further decline of King Billy pines [8]. The vegetation burnt by the 2016 fires also showed scarce signs of regeneration one year after the event. There is no reason to assume that this gloomy scenario could not happen elsewhere in Tasmania. It is likely only a matter of time, before the increasingly dry conditions and the more frequent, intense, and extensive fires will reach the many – if not all – subalpine and alpine vegetation communities, shrinking beyond recovery the fire refugia in which these iconic species are forced.

Alpine vegetation at lake McKenzie one year after the 2016 fire (Credit: farsouthecology.com).

Only a combination of short- and long-term actions will help preventing this announced ecological tragedy. For instance, every year in Tasmania a substantial amount of prescribed burning is conducted to reduce fuel load, to limit fire spread and intensity in both inhabited and natural areas. However, it is challenging to establish where to burn and what pattern to follow. Different fire behaviour models agree that the most effective approach would likely be similar to the burning practices traditionally conducted by Aboriginal people, with a large overall burnt area made by a high number of small patches, which would create a fine-scale fuel mosaic [9, 10]. Sadly, such approach would be too expensive for the limited resources available. More financially realistic treatments were also modelled, but displayed limited effectiveness [9]. Local efforts, while useful to prevent and fundamental to stop ongoing fires, are thus unlikely to be able to completely avert the increasingly catastrophic fires driven by a climate that is changing even faster than predicted. In an ideal world, strong immediate measures would be taken at a global scale to limit climate change effects. In this world, however, this is yet to happen. In the meanwhile, we thank the rain.

Prior, L.D., B.J. French, and D.M.J.S. Bowman, Effect of experimental fire on seedlings of Australian and Gondwanan trees species from a Tasmanian montane vegetation mosaic. Australian Journal of Botany, 2018. 66(7): p. 511-517.

BUSHFIRES AS DRIVERS OF EXTINCTION: PRESENT & PAST